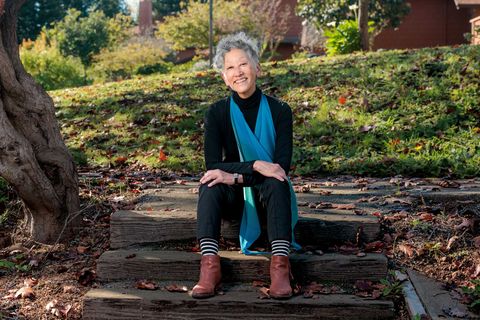 A benevolent chaos ruled my grandparents’ house. Countless books, chairs, various motors, tools, planks of wood, tins, mysterious containers, and odds and ends of all types piled into their many rooms, with cats and kittens running underfoot. There were always wonderful things to eat emerging from the kitchen, and I have fond memories of my grandparents sitting and laughing with friends amid all the commotion. A mix of rich disorder and camaraderie evokes in me a nostalgia for the Chinese household of my grandparents, and Karen Tei Yamashita’s tour de force I Hotel brings forth a similar blend of pungent history, confusion, and wonder.

Composed of 10 novellas, I Hotel covers a tumultuous decade, beginning in 1968, that gave rise to a formerly unthinkable Asian American identity. As a child growing up in the California of the early 1960s, I was made deeply aware that I was not the same type of Chinese as the majority of those who lived in San Francisco’s Chinatown. I was Hakka Chinese, and it was clear that I was not welcomed by many elders who identified as Cantonese. Recognizing distinctions was vital and important, lest one venture into hostile territory. As a child encountering Chinese adults in the San Francisco Bay Area, I was invariably asked the question, What do you speak? I was expected to clarify whether I spoke Sam-yup or Sze-yup or Toi-san or any of the dialects, including Hakka, spoken in the Pearl River Delta of Guangdong, and the answer would determine whether I was welcomed or not. In this atmosphere of guarded suspicion, identity was not inclusive, embracing variation, but exclusive, shutting out differences in general.

The narrative structure of I Hotel flips the traditional focus on a narrow, exclusionary definition of identity to include a myriad of voices from a wide array of backgrounds. Beginning with Edmund Yat Min Lee, whose Shanghai Chinese “ran under and around his speech” and who is “fluent in several dialects of the Chinese language,” and Chen Wen-guang, who appears effortlessly conversant in French and whose second wife was an Austrian baroness, the story encompasses characters who hadn’t been seen together in literature before—Japanese-speaking issei and their descendants, nisei and sansei; Black Panthers; a one-eyed cat named Konnyaku; a Filipino chef who claims to have cooked for Pat Nixon, Ho Chi Minh, and Imelda Marcos—a vast, ever-growing kaleidoscope of voices and perspectives that culminates in the 10th novella’s unified first-person-plural narrative: we.

“By the time we attached our destinies to the I-Hotel, it was an International Hotel in its third incarnation,” begins the final novella. The residents of the symbolically named International Hotel are elderly, primarily Filipino and a handful of Chinese, but the impassioned struggle to defend these residents brings together a broad coalition of students, activists, artists, and organizers. I was in my teens, a few years too young to be directly involved in the events described by Yamashita as they happened, but by the time I attended UC Berkeley, in the late 1970s, I was aware of a sense of identity much wider than the narrow definition that had been imposed in the early 1960s. Activist students whom I encountered did not question me, as I had once been questioned, as to why I, a Hakka whose early childhood had been spent in Tahiti, would share interests with them. The students who associated with me had parents who were Cantonese or Shanghainese or Japanese, but this was in neither my mind nor theirs, for an all-encompassing sense of identity had arisen by that time: the identity of being Asian. Fellow students were interning at the Asian Law Caucus, or we belonged to the Asian Student Union, and it wasn’t the prestige of someone’s ancestral village that we admired, but their personal mantle of unassailable cool that Yamashita captures so well in I Hotel, a combination of nerdiness, smarts, and passion.

Toward the closing of I Hotel, there’s a recognition that the definition of Asian American will continue to expand in the decades following the era captured by the book:

We were Chinese from Taiwan, Hong Kong, Singapore, Malaysia. We were Filipinos, Koreans, Thai, and Japanese. In another decade, our wave crested again higher, as we Vietnamese, Laotians, Cambodians, Hmong, Nepalese, Burmese, Indonesians also joined our distraught destinies to life across the Pacific. And in this same time period, the contours of Asia officially pushed southward so that we of the Indian peninsula, we Indian, Pakistani, Bangladeshi, also entered as Asian Americans.

I Hotel captures the vibrancy that arose from a transformative sense of unity and a new identity that was shared and inclusionary. The incorporation of so many points of view, as well as media including cartoon, analects, and screenplay, may seem fragmentary, but by radically embracing this chaos, I Hotel effectively conveys a rising, multivoiced, passionate energy. Instead of wielding a cleaver, slicing along lines of ancient cultural differences, the structure of I Hotel combines diverse melodic lines, sometimes harmonious, sometimes not, to express an Asian American consciousness emerging out of interconnected experiences of racial inequality and structural injustice.

Despite a sense of commonality, the decade evoked in Yamashita’s sweeping panorama was not, ultimately, utopian or romantic, and I Hotel doesn’t shy away from showing conflict and ongoing political infighting. Admitting contradictions, the accumulation of failures, both individual and collective, Yamashita writes: “A group could act as a single fist or as an open handshake.” Eruptions of violence—a melee between political groups and a gang-related massacre in Chinatown’s Golden Dragon restaurant—are among the last images of I Hotel, and yet, the final pages turn incantatory, earthy, raw, and luminous.

Not rigidly focused on one viewpoint alone but expanding outward to a greater vision, I Hotel conveys a dream of being included, of belonging. In its epic scope, the novel resurrects and rebuilds “a great layered and labyrinthine, now imagined, international hotel of many rooms.” A multiplicity emerges, not tightly woven but loosely bound and multithreaded, an imperfect, inclusive, dazzling complexity that moves and shifts and breathes.•