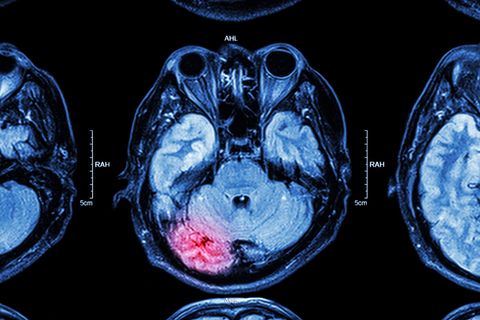 It wasn’t Alzheimer’s, it was frontotemporal dementia. Subtype Pick’s disease. Pick’s brains, the professor tells you, are quite rare.” This is how Julie Otsuka, author of the spellbinding novel The Swimmers, our September California Book Club pick, introduces us to the uncommon condition of Alice, one of the members of an underground community pool.

The novel opens on the habits and routines of the swimmers but shifts to explore Alice’s habits and routines and the coping mechanisms she has implemented throughout a difficult life. These patterns become even more pronounced when she is diagnosed with Pick’s disease, and we begin to understand them as symptoms of it.

Applying lipstick. Carrying a purse everywhere. Sunday rides with her husband. Later parts of the book relate Alice’s routines and quirks, which hold steadfast through the shrinkage and damage of the frontal and temporal lobes of her brain; for example, she still expects Sunday rides while staying at Belavista, a long-term memory residence. The mysterious disease is briefly explained, but the history behind it is more complicated.

In 1892, psychiatrist Arnold Pick, after whom the disease is named, recorded patients with cognitive failings, loss of speech, and extreme personality changes. However, it was not until 1911 that Alois Alzheimer identified the so-called Pick bodies and Pick cells, which are, respectively, abnormal aggregations of proteins and inflamed neuronal cells, the presence of which result in cell death, and subsequently shrinkage, in a patient’s frontal and temporal lobes. Pick’s disease was formally recognized in 1920, joining the likes of Alzheimer’s as a neurodegenerative illness.

The disease usually presents itself as a gradual decline in cognitive abilities, with symptoms worsening throughout the years. Changes in behavior and personality are some of the first signs of Pick’s disease. In the novel, we see the progression of the disease in how Alice slowly loses the ability to take care of herself and her house. Dying plants and dirty clothes stacked on the backs of chairs litter the home she lives in. Burnt rice and eggs on the ceiling come next. Her bent eyeglass frames, as well as brain fog, serve as warning signs for her daughter.

Pick’s disease does not cause short-term memory loss, an important distinction between Alzheimer’s and Pick’s. Although Alice at times does not remember how to spell her daughter’s name, recent trips to Costco and upcoming lunch plans remain clearly on her mind. This can hinder a diagnosis of Pick’s, as relatives believe their loved one is fine, since they still remember current details.

As Pick’s disease progresses, speech difficulties, misunderstanding others, and loss of motor skills also materialize. Alice goes from maintaining full conversations with her daughter, gossiping, and asking her questions about her love life to one-word answers such as yes. Her last complete sentence is “It’s a good thing there’s birds.”

Doctors can diagnose Pick’s disease in a patient as young as 20, but they identify most symptoms when a patient is between 40 and 60. The cause of Pick’s disease is still unknown. Pick cells have been found to be the result of various abnormal genes, yet the disease is not necessarily genetic—only a portion of cases are passed down genetically. As Belavista explains to Alice, there is no cure, only treatments to lessen symptoms. Antidepressants and antipsychotics target emotional and behavioral changes.

Researchers at the National Institute of Neurological Disorders and Stroke and other organizations continue to study the genetic underpinnings of Pick’s disease. Once these are identified, it is thought, novel approaches to replacing the genes will improve and restore cognitive function. But for now, people who suffer from Pick’s disease exist mostly in the moment.

Alice’s soft remarks and her daily lipstick color persist. “And with each memory shed you will feel lighter and lighter. Soon you will be totally empty, a void, and, for the first time in your life, you will be free. You will have attained that state of being aspired to by mindful meditators across the planet—you will be existing utterly and completely ‘in the now.’”•

Join us on Friday, September 16, at 5 p.m. Pacific time, when Otsuka will talk to CBC host John Freeman and a special guest, the Pulitzer Prize–winning novelist Michael Cunningham, about The Swimmers. Be sure to visit the Alta Clubhouse to let us and your fellow California Book Club members know what you think of the novel. Register here.

Related Stories
The Pull of the Pool
A Place for Us
Excerpt: ‘The Swimmers’
Elizabeth Casillas Elizabeth Casillas is Alta Journal’s editorial assistant.
Advertisement - Continue Reading Below
More From California Book Club
Writing Yourself In
Why You Should Read This: ‘Gordo’
Advertisement - Continue Reading Below
Why I Write: Jaime Cortez
Why You Should Read This: ‘The Gold Coast‘
Why I Write: Kim Stanley Robinson
Hunger to Be Known
Why You Should ﻿Read: ﻿﻿‘A Place at the Nayarit’
Why I Write: Natalia Molina
4 Book Recommendations for Fall
Excerpt: ‘A Place at the Nayarit’