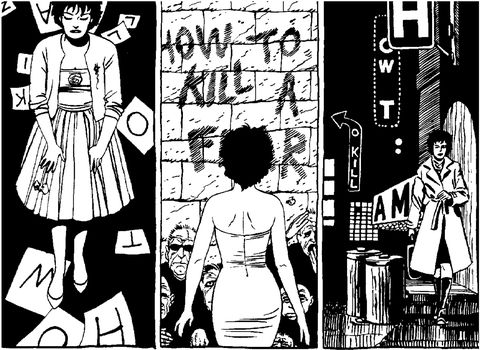 One day in late 1981, I was performing one of my executive functions at the Comics Journal (which I cofounded in 1976)—opening the mail. Each day brought a pile of mail—subscriptions, letters, bills, but also comics, sent to the magazine for review consideration. Working my way through the stack, I opened a nondescript white envelope with a handwritten address and pulled out a self-published comic called Love and Rockets.

It’s hard to convey—or even believe—now, when graphic novels are reviewed in the New York Times and adapted into films or TV series (and I’m not talking about Marvel Universe dross), how artistically dismal and culturally irrelevant comic books were in 1981. It’s like trying to explain to someone in 1950 what transportation was like before the invention of the automobile. Was the world really like that? Yes, it was.

The comic book was a congenitally adolescent entertainment from its start in the mid-1930s, and it stubbornly stayed that way for the next six or seven decades. By the late ’70s and early ’80s, corporate comic books had hit a nadir on all fronts: commercially, the form was no longer a mass medium; culturally, it was irrelevant; and artistically, it was feeble. Underground cartoonists like Robert Crumb, Gilbert Shelton, Justin Green, and Art Spiegelman were putting out only the occasional comic, and since the readership for such work was tiny and dwindling, these comics went largely unnoticed. The proposition that English-language comics could mature as an art form—the militant mission statement of the Comics Journal—was generally considered implausible, if not risible.

Which is what made the work of Gilbert and Jaime Hernandez’s self-published Love and Rockets all the more miraculous, at least to me. Reading it was such an aesthetically exhilarating and liberating experience that I immediately hit the keyboard of my typewriter and wrote an ecstatic two-page review for the Journal (“Love and Rockets is a most impressive debut of not one but two very promising young artist-writers,” it began—surely one of the great understatements in the history of comics criticism). The slim 32-page comic featured two stories each by Gilbert and Jaime. One 4-page story serves as an example of what was so intriguing about it: “How to Kill A…By Isabel Ruebens” is an oneiric tour de force showing the title character’s existential struggle to compose a story—and, ironically and somehow appropriately, it’s wordless! Jaime had entered literary territory, whether he knew it at the time or not.

After I published my review, and knowing nothing of their own plans to pursue cartooning, I called up Gilbert and Jaime and asked them if they’d like me to publish future issues of Love and Rockets. We had been publishing a handful of comics over the previous year, in addition to the Journal, and this was the most artistically exciting comic I’d seen since I’d started publishing the magazine. They took me up on it, and the first Fantagraphics Love and Rockets came out in July 1982. Jaime was 22. Gilbert was 25. I was 28. We were ready to take on the world (of comics).

Gilbert and Jaime found their voices quickly, if not immediately. Jaime’s signature characters, Maggie and Hopey, appeared in the Hernandezes’ original self-published edition of Love and Rockets in a single six-page story (which Jaime expanded to an eight-page story in the first Fantagraphics edition). Although Jaime’s early stories, some of which are gathered in the compilation Maggie the Mechanic, took place in a more science-fiction-y or adventure setting, emotional connections among his characters were always foregrounded. By issue No. 8, Jaime would abandon even these vestigial comic book trappings and place his characters squarely in the Southern California neighborhood of Hoppers.

Meanwhile, Gilbert’s work in the first two issues was more experimental, including his long, sprawling, wildly imaginative and playful story “BEM,” which the novelist and critic Carter Scholz described as “a serious story, a thorough and far-from-gentle critique of the super-hero genre.” But in Love and Rockets No. 3 (fall 1983), Gilbert began drawing stories set in the mythical Mexican town of Palomar. The first of these, “Sopa De Gran Pena,” with its dense, novelistic, almost overwhelming abundance of humanity, was a revelation—and blew everyone away (including Jaime). And in rapid succession, Gilbert’s second Palomar story appeared in No. 4, as did what I consider another landmark story by Jaime, “Locas Tambien: 100 Rooms.”

It was evident, if it hadn’t been earlier, that there was no stopping them. They came out of the gate swinging, armed with a punk defiance toward the comics-industry status quo, talent, a hard-fought craft, and a rare humane sensibility, and in less than two years, these “very promising young artist-writers” redefined the literary potential of the comics medium by creating characters with rich inner lives. This may be an obvious attribute of literary fiction, but it was, weirdly, almost unheard of in comics. The great comics creations prior to Love and Rockets have many virtues, but does anyone know or care about the inner lives of Little Nemo or Popeye or Little Orphan Annie or Pogo? They exist for other, different, and perfectly legitimate artistic reasons, but investigating the human heart is not one of them. Jaime’s and Gilbert’s characters are fully realized.

Being traditionalists, Los Bros Hernandez didn’t reinvent, but rather refined, the existing grammar of comics to accommodate their different priorities—of displaying character through naturalistic dialogue, of showing more-nuanced emotional gradations—which required them to subtly rethink the visual rhythms, pacing, and composition that were comics storytelling conventions. Their stories could not be as profound, as moving, as truthful as they are without their visual sophistication and eloquence. They weren’t merely writing literary fiction that was illustrated; “literary” comics (the quotes are used advisedly; my apologies) aren’t—or shouldn’t be—beautifully written sentences layered over nicely rendered images. Comics is its own unique form, not just two other forms—text and images—squished together.

Few cartoonists use the medium with as much grace and understatement and suggestiveness as they do to convey depth, ambiguity, loss, pain, confusion, the whole panoply of human messiness.

A new generation of cartoonists emerged in the 1980s. After Love and Rockets appeared, other artists published their own auteurist solo comics: Peter Bagge’s Neat Stuff, Daniel Clowes’s Lloyd Llewellyn (and Eightball), Jim Woodring’s Jim, Joe Sacco’s Yahoo. Cineastes probably enjoyed the same shock of the new as they watched the young French new wave directors emerge in the late ’50s—Truffaut, Chabrol, and Godard reimagining the possibilities of film.

I recently read an unusually affecting, extemporaneous quote by the Spanish film director Óliver Laxe about the importance of images in film: “The same thing that happens to images watched at cinemas also occurs between fire and skin when you get burnt. Even if you’ve put the flame down, its heat carries on burning and permeating the different layers of your skin, invisibly penetrating deeper and deeper, to our most inner self.” Gilbert’s and Jaime’s images burn into our inner selves not because they are striking or lovely in and of themselves—though they often are—but because they are embedded in and a crucial turning point for a larger, more meaningful narrative.•

Join us on Zoom on Thursday, January 19, at 5 p.m. Pacific time, when Jaime Hernandez will join CBC host John Freeman and special guest Jaime Cortez to discuss Maggie the Mechanic. Please drop by the Alta Clubhouse to let us and your fellow book club members know your thoughts about the book. Register here for the event.