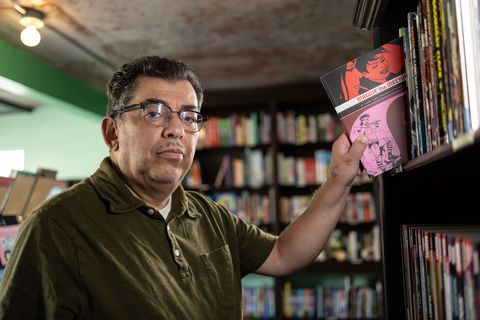 I found Los Bros Hernandez’s singular comic book series Love and Rockets 20-something years ago while browsing the internet in the computer lab between classes. Literary critic Laura Miller, whose work I avidly followed, had recommended the comics, first published by Fantagraphics Books in 1982, in Salon. Perhaps my curiosity was spurred, too, because I was a fan of “So Alive,” a song by the alternative-rock band Love and Rockets, and wondered what the connection was. As it turned out, the band had named itself after the comic book series. Later that day, I dropped by Cody’s Books on Telegraph Avenue, now shuttered, and searched for the comic book.

The one I bought was the Jaime Hernandez and Gilbert Hernandez compilation Las Mujeres Perdidas. I didn’t get around to reading it, however, until that summer at a writers’ conference in Iowa. It was the only book I’d packed because I planned to get some short story writing of my own done.

It was raining and humid and the sky was purplish. A thunderstorm—the sort we rarely get in California—was coming. Too shy to seek out the other writers in my fiction-writing cohort who were staying in the same dorm, and relieved to be, finally, alone, I pulled the book out and began reading.

When I started reading, I had no idea what a pro-solar mechanic might be, and it took a minute to orient myself to the visual progression of the panels, full of jump cuts, unlike the British and many of the mainstream, contemporary novels I more frequently immersed myself within. The dialogue was clipped, sometimes profane, emotionally truthful. Breaking the rules of all the literary-fiction workshops I had taken, there were exclamation points galore, but the punctuation felt of a piece with the stories, profoundly driven, as they were, by passion for characters who were unafraid to express their feelings.

There was a rumbling from outside. Someone from the workshop knocked on my door—I fantasized it was the man I had a crush on from the workshop—but then I returned to reading Las Mujeres Perdidas because I liked it, and honestly, who cared about a knock at the door, given the pages in front of me, no matter who was knocking?

The comics were a pure delight—from their voluptuous, inked lines to their genre mash-up of domestic realism, science fiction, and magical realism. As Miller promised, I would read others in the series and find that the comic books were as vivid as any literature I’d studied in school, but they were far less polite, which I loved.

The California Book Club selection for January is a compilation of early Love and Rockets comics featuring the Locas story line: Jaime Hernandez’s Maggie the Mechanic. Hernandez’s lead character, Maggie, is a newbie pro-solar mechanic who develops a crush on Rand Race, a dashing and more experienced mechanic. However, the first panels of the compendium set up the stars: Maggie; her best friend, Hopey, who is a punk lesbian; and Rand. At the start, Maggie wakes up with Hopey in bed, which immediately gets you to wondering, Wait, are they together? Where is this going to go?

Jaime Hernandez’s comic strips are largely set in a Mexican neighborhood, Hoppers, so called because “the cholos put hydraulics in their lowrider cars to make them pop.” He was fictionalizing his hometown of Oxnard—and adding a hint of science fiction to it—but what strikes me still is how, at an emotional level, and occasionally at a literal one, the characters felt like many of the kids I’d grown up with in Northern California. The friend who gave me rides to school in a car in which he’d put hydraulics and installed a new sound system so he could blast his old-school hip-hop and have the car bounce along the way. The surly, cool people at shows and house parties. Kids questioning their sexual and emotional preferences. And, of course, there was the circle of flawed, complicated, vulnerable girlfriends, which I felt was consonant with the Locas, the circle to whom Maggie and Hopey belonged.

Some call the series the Great American Comic Book, and part of that is the artwork. From panel to panel, Hernandez chooses perfect snapshots of lively moments—close-up shots, landscapes, confrontations. The comics require readers to make narrative inferences through visual cues, rather than exposition, as independent art films do, but we’re always wondering what will happen next. It’s the clarity of emotions that Hernandez depicts, how the characters feel when they are in love with one another, when they’re exasperated with one another, when they can’t stand one another, that makes Maggie the Mechanic come alive.

In what feels now like a monumental feat, Hernandez has kept the suspense going about what happened to Maggie—and the Locas—for 40 years.

Join us on Zoom on Thursday, January 19, at 5 p.m. Pacific time, when Hernandez will join CBC host John Freeman and a special guest to discuss Maggie the Mechanic. Please drop by the Alta Clubhouse to let us and your fellow book club members know your thoughts about the book. Register here for the event.

Read the opening of Maggie the Mechanic, our January CBC selection. —Alta

If you missed last week’s CBC conversation about Gordo between author Jaime Cortez and host John Freeman, read the recap or watch the video of it. —Alta

CBC host John Freeman writes about Jaime Cortez’s evocation of the senses in his depiction of Watsonville in a future classic, Gordo. —Alta

Alta editorial assistant Elizabeth Casillas writes about the conditions under which migrant workers live—conditions that form the backdrop of Gordo. —Alta

These were the bestselling titles at independent bookstores in California for the week ending on December 11. —Alta