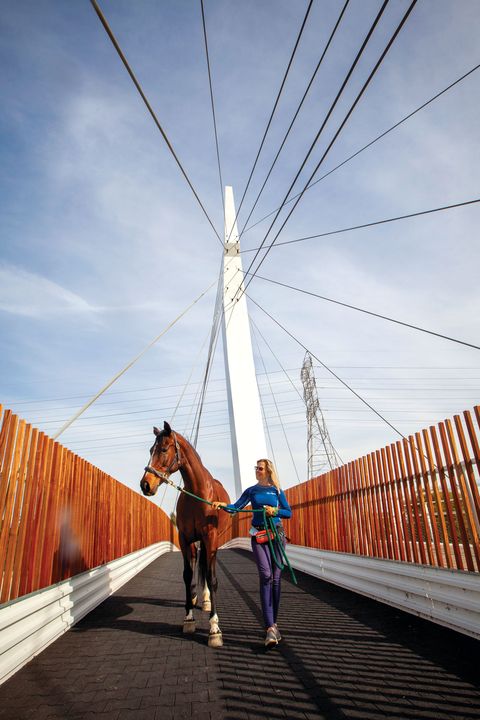 There was a time, back in the automobile’s infancy, when cars and pedestrians shared the road equally and equitably—there’s even documentary proof of it. Filmed in San Francisco in 1905, with the great quake a few months away, A Trip Down Market Street Before the Fire shows footage of cable cars, automobiles, horse-drawn buggies, and walkers making their way along the main thoroughfare of a city soon to be destroyed, with everyone and everything moving in the most orderly of (frighteningly chaotic) fashions.

After San Francisco was rebuilt, Market Street would become the most traffic-clogged roadway in the city, with pedestrians pushed to its margins.

It took 115 years for pedestrians to become ascendant again. In January 2020, all noncommercial motor vehicles were permanently barred from the busiest stretch of Market. The change came about through the Better Market Street initiative, a people-centric project that cost roughly $500 million and took a decade to complete. It allows only buses, streetcars, taxis, and commercial and emergency vehicles to travel on Market, helping guarantee a swift commute while bolstering pedestrian safety.

This article appears in the Spring 2021 issue of Alta Journal.
SUBSCRIBE

When Jodie Medeiros, executive director of the pedestrian-advocacy group Walk San Francisco, first stepped onto Market Street after the car ban, it “felt like a brand-new day, like a renewed sense of what the city is becoming,” she says. “I didn’t have this fear of stepping out onto an intersection without having to look over your shoulder.”

Los Angeles, with some 5,000 miles’ worth of sidewalks in serious disrepair, introduced Slow Streets L.A. in May of last year, a similar, albeit temporary, plan prompted by the pandemic. Neighborhoods like Del Rey, Sawtelle, Eagle Rock, Koreatown, and Mid-City West have shuttered streets to most nonlocal traffic, using sandwich boards to tell drivers to buzz off. “Slow Streets will help transform neighborhoods into accessible spaces where people can enjoy healthy recreation—while giving them the space they need to be safer in this crisis,” said Los Angeles mayor Eric Garcetti at the time of the project’s launch.

The city has been introducing other ways to make itself more foot-friendly. The North Atwater Bridge, a cable-stayed steel pedestrian crossing above the L.A. River that connects Griffith Park with the Atwater Village neighborhood, recently opened. The bridge, with two parallel 12-foot-wide spans, is a boon for walkers and cyclists. “It’s been great for my family as a safe connection,” says cyclist Terence Heuston. It’s also geared toward equestrians—one span is reserved for horses; the other, for pedestrians and cyclists. (Atwater Village is home to many stables.) Farther upstream, the Red Car Pedestrian Bridge—cheekily named after the Red Car trolleys that once rumbled across an earlier bridge at the same spot—also opened last year, offering another crossing for pedestrians and cyclists.

RISE OF THE PEDESTRIAN

Rethinking California cities with pedestrians, not automobiles, top of mind is more than a one-off project here and there. It’s a movement, and one that has been accelerated by necessity. For all its multifaceted cruelty, the pandemic has inadvertently helped usher in a deeper understanding of the need for safer public spaces. Santa Monica used COVID-19 concerns to expedite a 0.6-mile, two-way protected bike lane along Ocean Avenue; San Francisco and Oakland were able to push forward more of their own Slow Streets projects in record time because of the state’s stay-at-home measures. At press time, San Francisco, the second-densest city in the country, had closed 38 street miles to automobiles, while Oakland was clocking in with 21.

The most notable—and noticeable—change in cities may be the transformation of parking spaces and streets into dining spots known as parklets. Designed as open-air seating to thwart transmission of the virus, the latest generation of parklets has been a lifeline for many restaurants while indoor dining has been banned. New ones have sprouted in West Hollywood, Laguna Beach, Berkeley, Sacramento, San Diego, and many other cities. Ranging from the bombastic (think neon colors and flags) to the austere (horizontal planks and potted horsetail), the parklets will likely outlive the pandemic.

“Creating car-free and low-traffic spaces during COVID has given such a supportive boost to walking,” says Medeiros of Walk San Francisco. “And walking isn’t just good for us; it’s good for our city, from supporting local businesses to supporting cleaner air.”

Medeiros left the private sector after volunteering in her spare time to give back to the community. Before joining Walk San Francisco, she worked at the powerful advocacy group the San Francisco Bicycle Coalition, which has long promoted cyclist safety. “It’s hard to get people, from drivers to cyclists, to think of themselves as pedestrians,” she says. “We are all pedestrians—that’s the beauty of it.”

City hall has not always been eager to buy into that vision. San Francisco scaled back the original Market Street plan, which would have created a sidewalk-level bikeway. “Now bikes, which have lost a dedicated space, will have to share the road with the buses and streetcars,” Medeiros says. Her group, along with the San Francisco Bicycle Coalition and San Francisco Transit Riders, wrote a letter asking the city to reconsider the new plan in favor of the old one.

Parklets, like this one in Truckee, California, often extend a restaurant’s footprint into the street and are a more common sight across the state.
Penni Gladstone

So much progress in such a compressed amount of time has sparked concerns. With COVID raging in the state, the newfangled alfresco dining areas led to even more debate about putting profits over the health of workers and have raised questions about public space being used for commercial purposes. Some parklets, decked out with heaters and massive plants that obstruct the sidewalk, aren’t just annoying for passersby; they’re unsafe for the elderly and pedestrians who rely on wheelchairs or other mobility devices.

California still has a long way to go in making the infrastructure improvements needed to support pedestrian-friendly cities. With a dearth of housing and a lack of far-reaching public transportation, areas like Silicon Valley and Marin County have floundered when it comes to coaxing denizens out of their vehicles. (The Bay Area has some of the worst traffic in the state.) And San Francisco’s Vision Zero program, a plan intended to eliminate pedestrian deaths by 2024, has so far fallen short of its lofty goals; 2019 saw 18 pedestrian deaths on city streets. California’s pedestrian-fatality rate is almost 25 percent higher than the national average—519 pedestrians were killed in the state between January and June of 2019.

But policy isn’t always everything. Sometimes the smallest tweak in a major design can result in much-needed change. Take, for example, what’s happening along the aforementioned L.A. River.

In January, Los Angeles County released a draft plan aiming to improve public spaces along the iconic waterway, which stretches 51 miles from Canoga Park to Long Beach. Included in the nearly 500-page plan are new benches for passersby. While this footnote might seem inconsequential, it signifies yet another turn of events in the car-forward town. Public seating on public walkways signals to residents that, yes, it’s OK to strip off the seat belt shackles, leave the four-wheeled behemoth in the garage, and take to city streets like people did for centuries before the almighty automobile called the shots.

The pandemic has pushed exercise seekers out of gyms and into places like Palisades Park on Ocean Avenue in Santa Monica.
Penni Gladstone

“Benches are historically part of the public realm—a place to be seen and watch your community,” says Medeiros. “They’re great for the health and well-being of people and a way for a community to connect without being so obvious.”

And, with all the walking we’ll be doing in this new pedestrian-friendlier landscape, it’ll be nice to take a break and sit down every now and then.•