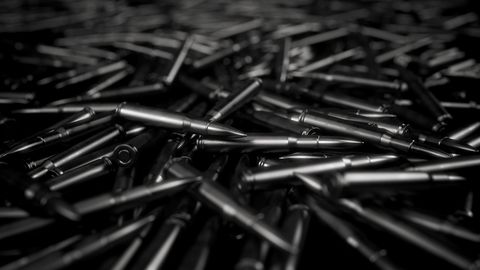 Mornings before work, I would remain in bed with my back to the television and listen to the news for a half hour. In the days surrounding the mass shooting in Buffalo, someone was quoted saying, “We have to teach our children to stay small and invisible.” That line ran laps in my mind until I became angry and this poem emerged. I didn’t sit down to write it; it came over me like a fever.

This poem appears in Issue 22 of Alta Journal.
SUBSCRIBE

Farms of the U.S. were once grandparents with mules
now they’re corporations that harvest guns from the ground

We used to bury elders their fists dripping mustard seeds
now seeds are more illegal than bullets
and my family can’t afford to bury anything: hatchets, vices, debt

Oh, ghost of Medgar Evers, pray for me

Look at us all fancy with our fetishized compassion

Free speech is only valuable when your point is rhetorical nonsense
but you don’t hear me though Your ears still ringing from the shootout
at the softball game.

Is it time for a new war, yet? Wake up the president

Here’s an icon of Mary
holding an icon of a bulletproof baby Jesus
beneath a speech balloon reading: HANDS UP DON’T SHOOT

GRIEF!! It’s what’s for dinner at our last supper
Doubting Thomas ran a finger through Jesus’s wound and found a bullet

There’s a whole-ass church in that open casket,
go get in it and know God
Hurry Up so we can fill your grave with buckshot

Did you know another name for a bullet is Love Letter?
Is it better to give or receive?

All our tears have been outsourced to unarmed countries

When the smoke clears, whoever’s left standing
gets to play eyewitness on morning TV

If you’re gonna be famous for 15 minutes, be breaking news
Be a top story where veteran reporters choke on their tears
Be described as very polite and very quiet and very shy;

A bullet by any other name will still bloom just as red
as the love I feel during any American shoot-out
Which YouTube star will lip-synch the anthem
while a procession of police cars pull into the parking lot?

In this country, we don’t have a problem with guns;
our problem is with mental health, as in:
“You must be crazy to think I would give up my gun” or:
“Shoot first, take meds later” or:
“Why doesn’t a loaded gun count as healthcare”

Did you know police do not offer Buy Back Programs in affluent communities?
They hold Stand Your Ground Workshops at high schools with Kiddie Shooting Ranges

Did you know toy producer Tonka once made real rifles?
A buck’s a buck but don’t tell that to a deer.