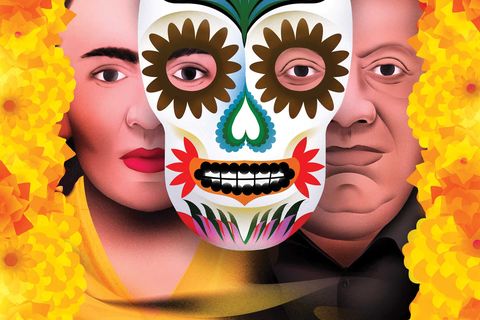 In October, in a collaboration with the San Francisco Opera, El Último Sueño de Frida y Diego (The last dream of Frida and Diego) will premiere at the San Diego Opera.

Contemporary classical pianist Gabriela Lena Frank composed the music for the opera, her first, and Pulitzer Prize–winning playwright Nilo Cruz wrote the Spanish-language libretto about iconic Mexican artists Frida Kahlo and Diego Rivera. Frank had been thinking about writing an opera about Kahlo since 2007, when someone suggested it to her. She remembered her mother telling her about Kahlo when she was a girl in Berkeley—that Kahlo was bajita (short), brown, mixed, and creative, like both Frank and her mother, who is Peruvian and Chinese.

Frank knew that she didn’t want the opera to be a biography of the artist. She’d always been fascinated by Día de Muertos, a Mexican holiday when the souls of deceased relatives visit the living, and she and Cruz decided that would be their way in—a kind of fantasy set on Día de Muertos in 1957, when Rivera wants Kahlo to return from the afterlife and join him in the world of the living.

Frank, the winner of a Latin Grammy, also knew that, with this work, she wanted to help diversify opera and classical music generally. In particular, she yearns for classical music to welcome people of color and to go beyond European composers. In 2017, she founded the Gabriela Lena Frank Creative Academy of Music, which provides mentorship, residencies, and commissions for emerging composers. Rather than locate the academy in, say, San Francisco or New York (or Houston—she earned a bachelor’s and a master’s degree at Rice University), Frank chose Boonville, a rural Northern California town, where she and her students also teach music in the local schools.

The artists in El Último Sueño, decades gone, still feature prominently in the public imagination, particularly Kahlo, whose image can be found on socks, mugs, candles, and T-shirts. The two fought, had multiple affairs, and divorced in 1939, remarrying a year later. This sort of drama makes the duo, who painted each other for 25 years, endlessly compelling.

After premiering in San Diego, the opera will travel to San Francisco next June. For more information, visit sfopera.com.•