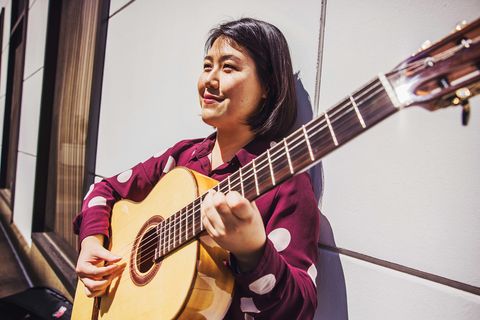 Ozzy Osbourne and the dark gods of Black Sabbath could never have imagined this.

In the music room of Young Oak Kim Academy, a public middle school in Los Angeles’s Koreatown, one of the world’s finest classical guitarists is about to lead students through the familiar strains of the band’s heavy metal dirge “Iron Man.”

“All right, we’re going to review what we did yesterday. Maybe at the end, we can put everything together,” Byun says before asking the students to quickly practice a melody by themselves. The kids play tentatively until Byun jumps in and says, “Shall we try it? I’ll do it first. So first just listen, then the second time start in.”

Byun is dressed in a black polo shirt and slacks and wears her hair in a shoulder-length bob. She’s small, but even so, it’s surprising to see just how delicate her hands are as she works through the song’s opening, chanting out the note pattern for the benefit of the class.

“Wow, you remembered everything,” says Byun with a satisfied laugh. “That was really great.”

The middle schoolers probably don’t realize that the 27-year-old native of South Korea who visits their class twice a week is the recent winner of the grand prize in the Guitar Foundation of America’s prestigious International Concert Artist Competition and is among the world’s most promising young classical players. She comes to the school as part of Lead Guitar, a Tucson, Arizona–based nonprofit designed to bring high-quality music education to low-income, at-risk students.

“Bo is that rare guitarist who has the best of both worlds,” says musician Brad Richter, who cofounded the organization with Tucson businessman and guitarist Marc Sandroff. “She’s so technically proficient that she completely lets her artistry shine through. Bo is very expressive; she makes big dynamic contrasts and very smart phrases. You can tell that she has thought about every single note. And every note has a mission and direction.”

Many Americans don’t typically associate the guitar with Korean culture, but Byun says that classical guitar is commonly used in movie soundtracks and in the old pop songs that her mother frequently listened to in the family home. Byun embraced the instrument after dropping out of piano school at five. “It didn’t really click with me, and I told my mom, ‘I just can’t do this anymore,’ ” Byun recalls. “But one day, we were folding laundry, and some guitar came on television. It just looked really fun. Piano, the way I was taught, was very rigid. But guitar? It just seemed much more free-spirited.”

With the guitar, Byun had found her instrument, and her playing quickly advanced. At 12, she moved to Beijing to study with a teacher there. At 15, she left for Southern California to work with William Kanengiser of the Los Angeles Guitar Quartet, living with a host family in Pasadena. Then it was on to New York and Juilliard. While in the city, she met her husband, Ernesto Montoya, a Nicaraguan-born L.A. trumpet player studying at the Manhattan School of Music.

Lead Guitar traces its origins to Richter’s work with Navajo students at a high school in Page, Arizona. There he met a group of boys who were talented, self-taught guitarists but couldn’t read music. Richter received approval from school administrators to develop a music curriculum, which formed the core of the system that Byun and the program’s other “teaching artists” now employ with full-time teachers at schools across the country.

The concept, says Richter, is less about turning out a cadre of world-class guitarists than it is about enhancing participants’ chances for academic success. “We don’t expect or even encourage kids to be professional musicians,” he says. “We want this to be the thing that makes them feel special while they’re in school, that makes them feel like they have a community, that makes them realize that their hard work will pay off and turn into something beautiful that people appreciate and honor—if they take a chance and invest in themselves.”

The original trio of kids who inspired Lead Guitar were frequently in trouble and failing classes. But Richter says they went on to trade schools or four-year colleges and ended up in careers they love. One works as a chef at the luxurious Amangiri resort near Lake Powell, while another became a landscape photographer. “And they’re all still playing guitar,” Richter says.

The program now works with 5,000 students in nearly 100 schools; L.A. alone has 17 schools lined up for next year. Richter considers Los Angeles a world capital for guitar, commensurate with London. Guitar-centric L.A. rock music, from the likes of Van Halen, X, and the Eagles, has always enjoyed a higher profile. But the city also has a long classical tradition—from luthier businesses that trace their origins to guitar artisans in Mexico nearly a century ago to USC’s Thornton School of Music, where Byun earned a doctorate in the prestigious guitar program.

She joined Lead Guitar as a way to give children in Los Angeles the opportunities she had while growing up in South Korea, where arts education is more highly valued than in the United States. Young Oak Kim Academy’s enrollment is 94 percent Latino, and Byun says that many students grew up with the sounds of guitar at home. A familiarity with traditional Mexican songs, which are part of the Lead Guitar curriculum, makes it easier for many of them to learn. The rise of K-pop has also created some common ground, because the kids have been curious to hear more about Korean culture from Byun.

While a few students show a natural gift for music, Byun, like Richter, believes that Lead Guitar is about far more than just guitar.

“They get to learn how to enjoy music and to be responsible consumers of music,” she says. “But it’s also just a good discipline. You learn how to sit and work through difficulties and not give up. I try to teach them, ‘Don’t just do it once and be done. Do it several times and see what changes.’ Music teaches you to be resilient. And patient. These days, everything with kids is just instant. Five-second videos. Swipe, swipe, swipe. We’re counterbalancing that culture with something a little slower. The kids who do well in music class, they’ll also do well in other things.”•

Related Stories
The Sounds of a City
Classical Music’s Leading Ladies
Playing a Sweet Mix of Gumbo
Matt Jaffe Matt Jaffe writes about the environment and culture of California and the Southwest.
Advertisement - Continue Reading Below
More From Premium
A Road Trip Driven by the Drought
Pop Moments: Movies
Advertisement - Continue Reading Below
A Life Cleanse in the Waters of Desert Hot Springs
Reviving Indigenous Pottery
Shh! Secret Testing Grounds
Death Valley Is the New Normal
Pop Moments: Photo Shoots
In Search of the Lost Dutchman Mine
An Experiment in New Cuyama
Pop Moments: Music Videos