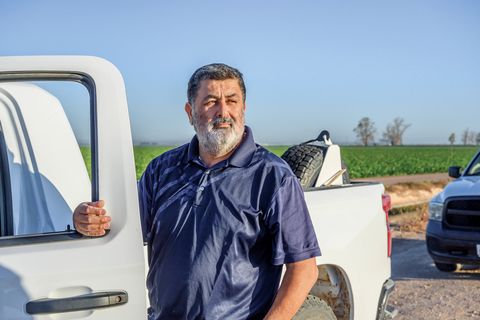 Before his commute to work every morning, Sergio Lopez packs the essentials:

Lopez is a zanjero, or irrigation-ditch minder, in the Imperial Valley, an agricultural expanse that lies between the Salton Sea and the Mexican border. The Spanish word for “ditch” is zanja. Since the days of old Alta California, zanjeros have directed irrigation water where it’s needed, released exactly the right amount for crops to grow, and stopped the flow when the earth has had enough. California leads the nation in farm cash receipts—the Imperial Valley alone produced more than $2 billion in crops in 2019. Every farm in the valley needs water delivered by the Imperial Irrigation District. Lopez is their deliveryman.

When people think of the state and water, the so-called Kings of California often come up, like William Mulholland, a onetime zanjero who worked his way up to become the first supervisor of the Los Angeles Water Department and the builder of the Los Angeles Aqueduct. But who really controls the irrigation canals that carry water from the state’s reservoirs and aqueducts to the people and farms that are its end users? Zanjeros, the legendary water channelers of California.

With his salt-and-pepper hair and trimmed goatee, Lopez has the bearing of a college professor. And given the wisdom he’s earned by coaxing water out of rivers and over to thirsty fields, his patient and learned demeanor is itself an essential resource, especially during a drought. When he shares his story, you hear heritage, humility, and pride—a quiet confidence refined by decades of hard work on the canals. “My parents are from Sinaloa,” he says. “When they immigrated from Mexicali to the U.S., I was nine years old. My dad was a feed-truck driver. So [when] I was a little kid, I started working cattle. I used to work for a farmer in the valley. I’ve worked in agriculture all my life.”

In this valley, water is nature’s oxymoron: it exists because it shouldn’t. It’s piped in from the Colorado River, and the district employs 143 zanjeros to manage its path. In an average year in California, approximately 9.6 million acres are irrigated with roughly 34 million acre-feet of water. It’s an amount that would cover 31 million football fields with 1 foot of water. On the Imperial Valley’s football field, Lopez is quarterback, pass receiver, and sometimes coach, all at once.

Water in an irrigation canal in the Imperial Valley waits to be released into a field.
Tod Seelie

In Southern California, irrigation via diverted water from the Colorado River runs through a complex system of reservoirs, aqueducts, and canals. California farms supply about 16 percent of total U.S. agricultural exports. The roughly nine million acres of irrigated farmland in the state represent approximately 80 percent of all water used for businesses and homes in California. Stakes are high. In the Coachella Valley, just north of the Imperial Valley, agricultural production is worth some $7,000 per acre, says former Coachella Valley Water District zanjero supervisor Ty Mull. “If it wasn’t for the zanjero who is making $25 an hour to deliver water,” Mull says, “the loss would be over a million dollars a crop.” He calls the work of zanjeros “the lifeblood of our agricultural industry.”

According to Robert Schettler, the public information officer for the Imperial Irrigation District, experienced zanjeros on average earn $85,000 annually, including benefits. But the value of their role to the state’s cultural heritage is incalculable. Zanjero folklore abides in ballads, novels, art exhibitions, documentaries; the word zanjero even shows up in the names of housing subdivisions.

If the legend seems romantic, the work—especially during a drought—is not, but it is essential. Lopez’s district “has the largest allocation of the Colorado River,” Schettler notes. “Our entitlement is more than some states’. People are asking, ‘What are you doing to conserve water?’ We conserved over seven million acre-feet since 2003. We have to do our part. Part of that is to help these guys make their orders without wasting water.”

The irrigation district is the nation’s largest, moving water via four canals. The 80-mile All-American Canal channels water from Imperial Dam into three arteries: the East Highline, the Central Main, and the Westside Main. These canals flow south to north. Off the branch arteries are smaller lateral canals that run east to west.

Lopez’s job is at this intersection of canals, tradition, and technology. Every morning, he receives irrigation orders from valley farms. As he made his rounds one day this summer, he irrigated several types of crops (fruits, vegetables, forage products like alfalfa hay and straw). Using software that manages irrigation data (such as scheduling and water-release routing) and a calculator, he computes allotments of requested acre-feet before setting out for these distribution canals. Out in the field, he uses a map and manipulates canal gates with experienced facility, wise to the ways of running water.

“Our water system is gravity flow,” Schettler explains. “It comes from the Imperial Dam, and water’s constantly running, 24-7. Sergio’s job is to get water where it needs to go without giving short or giving too much. It’s a delicate balancing act. When Sergio gets his orders, it’s crazy—we have 500,000 acres of land here in the valley that we need to irrigate.” The district, he says, has three shifts of zanjeros working 24 hours a day.

Lopez’s map depicts a confluence of canals called Ash 15/30, located between Highway 80 and McCabe Road. He consults his daily manifest and releases water by lifting canal gates with his iron gate bar until the flow reaches the requested allotment for a field. Then his job transitions from calculation to sensibility. The release is measured not only by the level of water in a canal but also by its speed of flow through a series of gates. Water levels can fluctuate dramatically in the course of a day and cause outflow to canal gates to also fluctuate. Too much water can be released; water can be lost downstream. Gates must be adjusted to fulfill orders and compensate for nature’s impact and flow fluctuation within a canal. Automation can’t beat nature. “Somebody has to ride the canal,” Lopez says. On a rainy, windy day, nature delivers tumbleweeds, trash, and worse. “If somebody doesn’t clean it up, it’ll run over.”

Sergio Lopez adjusts the height of an irrigation gate to control the amount of water released. The Imperial Valley employs 143 zanjeros to manage the flow of water that is piped in from the Colorado River.
Tod Seelie

In addition to using a calculator and a computer, Lopez measures water levels with a yardstick. Applying 20 years of experience, he determines the water speed in a canal and when the flow will hit the next gate. Hopping into his truck, he needs to arrive at the gate before the water does. It’s a constant race against time and gravity flow. Too much water running too fast can flood over a gate and ruin a crop just as easily as an errant tumbleweed can block the flow of water through a gate.

His work is about more than chasing water, though—it’s also about connecting with people. “The relationship with the farmer is solid,” Lopez says. A good zanjero also becomes friends with a farm’s irrigator. “If you can’t make it somewhere and they see something, they can help you out,” he says. “The farmers rely on you. They depend on you. And we depend on them for our work. If they’re not farming, I’m not working. We’re in constant communication. It couldn’t be any other way.”

And yet his work is unsung.

“They work in fields and ditch banks in all weather conditions and all seasons,” Schettler says. “Unless you’re an agricultural water customer, irrigator, a fieldworker, or someone who plays a part in delivering water, it’s easy for zanjeros to go unnoticed, but they are a key part in the delivery of water.”

The job is also dangerous. The All-American Canal functions as a binational moat separating the United States from Mexico. Migrants, tourists, and even border patrol agents have drowned in its waters. Smaller irrigation ditches are just as risky. Lopez has discovered dead bodies and drug stashes in them.

The old zanjas are now fantastic realms of steel and concrete, sustaining agriculture whose bigness is always at risk. Yet the connection between the Colorado and the zanjero remains the same. Technology hasn’t changed the simple beauty of a hand cranking open a gate, or the glint of sun on water as it rushes through. Nor has it altered the earth’s response to rejuvenation. And while the days of zanjeros on horseback are gone forever, one thing that remains is the cadence of farmers and water channelers speaking their unique language of cultivation. The sight of a lone man listening intently to the river’s end—that’ll hold in your eye like dusk. •