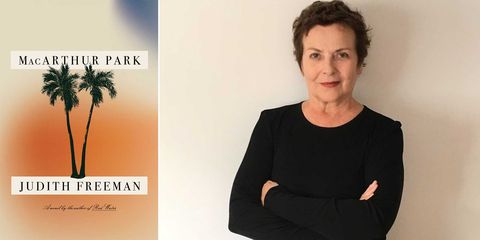 Small towns can lend themselves to oversimplification. You stay, you stagnate; you leave, you flourish. But Judith Freeman—who has made a career excavating the nuances of her small-town-Utah upbringing—has bigger ideas about what it can mean to be from a family-values state or to discover yourself anew if you depart.

Neither is as simple as the clichés would have us believe.

With her fifth novel, MacArthur Park, Freeman draws on material from her own life, her longtime Los Angeles neighborhood, and her previous fiction—the narrative revisits characters and situations from the author’s 1989 novel, The Chinchilla Farm—to explore the tension between women’s obligations and freedoms.­­ In clear, melodic prose, she examines one friendship and two very different lives.

Married at 17, Verna Flake is divorced by her 30s. She packs her possessions in a horse trailer and leaves Utah for Los Angeles, a city that’s more an idea than a destination—she’s never been there. It is, however, home to her childhood best friend Jolene, an artist raised by parents who left her mostly to her own devices. From day one, Jolene was wilder, ruder, and more daring than the traditional Verna. She challenged taboos. Verna couldn’t get enough of her.

What does it mean to love someone who is terrible to you? That’s the story of Verna and Jolene. As Elena Ferrante does in the Neapolitan Novels, Freeman delves here into the complexities of friendship: the powerful charm of the reckless ally; the way two people can be pulled toward each other yet struggle to interact; the tie that remains even after a friend moves away. As adults, Jolene and Verna remain links to each other’s past, but the memories they share are complicated and often touched by loss. “Our bond is made up of affection,” Verna says, “but also of disorder, instability, incoherence, feelings of inferiority or superiority. We’ve known bullying and bad moods, affection and intimacy, and now for many years a kind of estrangement and distance, and yet we find ourselves drawn to each other again.”

Verna marries Vincent, Jolene’s former husband, and they make their home near MacArthur Park. Thirty years pass. Verna becomes a writer. Jolene pursues notoriety in the world of feminist performance art. Then, out of the blue, she asks Verna to take her on an important road trip. Though it’s been decades since they’ve spent time together, their need for each other lingers. Verna tells us, “She had brought live greetings from a distant past. She knew me in a way others didn’t, just as I knew her.”

This road trip—which puts the characters in a car and a series of motels —allows Freeman to escalate the tension between them. Jolene is just plain rude, pontificating about art, life, and family. Verna remembers how the “devout, sober parents who had nurtured me had felt the importance of everyday niceties rather than the need to scrape them from the surface of life,” and we see her at her most introspective as she drives toward Utah.

Jolene has always found meaning in agitation. She has lived a life of shock and naked exposure. As they travel, she is immune to the stark beauty of the landscape. “I wondered if she was even aware of this world we were passing through,” Verna muses. Verna, on the other hand, takes joy in nature, books, and her marriage. Through her, Freeman asks us to consider the value of a quiet life, the beatitudes of deep connection, but also the pitfalls of putting others first. Can satisfaction be found in the quiet stillness? Is an artist’s life more fulfilling? Freeman resists the idea of either stereotype being true.

MacArthur Park presents these dichotomies without judgment, interrogating a life of service with as much tenacity as a life spent in the arts. At times, Verna ponders whether she’s lost herself by building her life around Vincent. “It wasn’t a big heart that had prevented me from living for myself,” she thinks, “but an upbringing in a culture that had been so completely devoted to training women to think mainly of others. How to be if you wanted to be wanted.”

And: “I was an earnest person. Often I wished I weren’t. I’d never had the cool, wry temperament of Jolene, sincerity being my natural default. It wasn’t something I felt I could change.”

What Freeman is saying is that there is no easy road. We’re all lost or disconnected. As much as Jolene has bothered Verna, she’s also served as something of a muse. “I had not forgotten what she told me years ago,” Verna observes,

how the deepest art comes out of not being afraid to stick one’s finger into the wound—and not just stick it in but wiggle it in an attempt to activate the pain and discover the source of the wound. At the time the image had disturbed me. Why would anyone do that? I wondered. But that was before I became a writer. Before I understood that’s what novelists do. Each of us narrates our life as it suits us, but novelists tell stories with the bandages pulled off.

That’s what Freeman does throughout MacArthur Park: drill into the core of a hard, long-standing friendship. It’s the kind of match you know isn’t perfect, but you crave it anyway, if only as a living form of nostalgia. Why do we remain connected to friends who hurt us or misunderstand us? Freeman’s been there also, and she writes beautifully from that uneasy space.•

Pantheon Books
MacARTHUR PARK, BY JUDITH FREEMAN
Pantheon Books Bookshop.org
$25.76
BUY THE BOOK
Related Stories
Be Here Now
Notes of a Native Son
13 New Books for October
Heather Scott Partington Heather Scott Partington is a writer, teacher, and book critic.
This content is created and maintained by a third party, and imported onto this page to help users provide their email addresses. You may be able to find more information about this and similar content at piano.io
Advertisement - Continue Reading Below
More From Online Exclusive Book Reviews
Natural History
Uncanny Valley
Advertisement - Continue Reading Below
The Never-Ending Story
Ways of Seeing
Rock ’n’ Roll Fantasy
The History of Violence
Eye of the Beholder
The Things They Carried
Starchitect
Promised Land