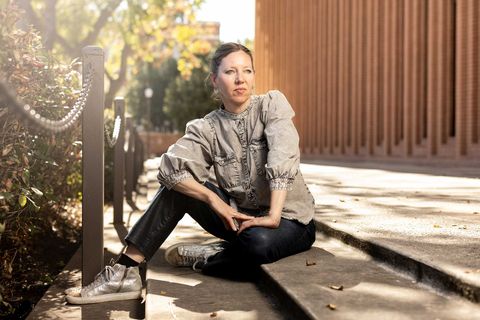 Watching Maggie Nelson think has been one of the most satisfying pleasures in American life these grim past two decades. Book by book, Nelson has swallowed and tuned up genres the way an auto shop brings rust buckets back from the dead. True crime (Jane: A Murder), in which a woman, Nelson’s aunt, is murdered. A memoir (The Red Parts: Autobiography of a Trial), in which the meaning of memory comes into question following a trauma. A book-length essay (Bluets), in which a person dies and the author slides into spaces of melancholia. Each has emerged from Nelson’s garage flame-covered and far more interesting. Also, far more capable of telling a complex story about a familiar thing.

In The Argonauts, her astonishing 2015 essay, Nelson trains her potent and discomfiting eye on a tale frequently distorted by the preconceptions of the participants and their genders: the love story. We open with Nelson falling in love with Harry—“a butch on T,” as we later come to know him. Not long after, she and Harry move in together, and they eventually have a child, setting into motion a series of changes that unfold across The Argonauts.

Narrating with a warmed-up version of the prose fragment she used in Bluets, Nelson respins The Argonauts’ love stories with dexterity and exquisite care, threading them through currents of queer theory, poetics, personal experience, and disquisitions of ecstasy and self-doubt. Along the way, she worries whether some fundamental, crucial part of her queerness will be left behind in this evolution.

The vulnerability with which Nelson tells these stories, and thinks about them, is daring and, already, immensely influential. Whereas essayists or critical thinkers once arrived on the scene of their endeavors like assassins in pre-wiped gloves, took the loot, got out, Nelson lingers, takes off her masks, and sits down on the couch to inspect the metaphorical room. Drinks a glass of water. Then lays the table for a meal.

The patience and care with which Nelson proceeds—thinking and narrating in one constant orbit—create several effects. Among of them is a finer-grain representation of nonbinary thought. Allowing herself to pause, to double back, and to return to a scene or thought with new ideas means that Nelson exposes us to a wide range of thoughts, not simply their conclusions.

Braided into this style of reflection in The Argonauts is a constant engagement with the people who shaped her thought. As Nelson tells these love stories, she quotes frequently from the work of philosophers and thinkers whose voices are alive inside her. Among them are founders of queer theory, like Judith Butler and Eve Kosofsky Sedgwick, not to mention philosophers like Roland Barthes and Wittgenstein, poets like Eileen Myles and CAConrad, and the developmental psychologist D.W. Winnicott, founder of the “good enough” theory of parenting.

A popular British pediatrician of the mid-20th century, Winnicott is one of the North Stars of this book. Amid the semioticians, he calls Nelson to clarity, centering her around a fundamental question: how to live so that a life for which you are responsible is OK, too. She takes from his commonsensical example a freedom—the topic of her most recent book—and part of The Argonauts is devoted to describing what she does with that freedom, what bumps up against it on the opposite side.

In describing this crowded space—the one made of ideas Nelson is pushing back against—she is at her most nimble, unique, and compellingly intimate. She writes on how some of the earliest ideas she was exposed to about intimacy, of the body, of motherhood, were encountered in observing her mother’s life and disastrous romantic attachments, which included a stepfather who probably did not love Nelson back. Gently sometimes, forcibly in other instances, Nelson produces an intimate portrait of how traditional spaces of family life and marriage strangled her.

This information arrives not as flashbacks, but in waves across the book. This narrative strategy—having the past blown sideways into the room through an open window—is beautifully effective. It means we reencounter Nelson’s relationship with Harry over and over again and experience her sense of wild gratitude, of luck, and of deliverance from various vantage points.

Like Anne Carson, whose staunch yet warm classical style in Short Talks prefigures Nelson’s narrative mode here, Nelson has such a strong art-historical eye it is shocking when she puts down her many tiny weapons and tools and looks at her beloved undefended, without trying to wrest meaning from him. To allow herself to be simply moved by Harry.

Here’s where the other effect of Nelson’s radical transparency is so potent, so necessary, and so enlarging in The Argonauts. It means that equivocal feelings have a place to live and exist—which they do in our living selves, of course, but often, in the writing about them, they get lost, sanded down, either through self-censorship or censorship. As a queer woman who grew up in a heteronormative society, Nelson is no stranger to those losses. She is here, in some ways, to smash such forces. But she is not about to use another person’s life—Harry’s, say, or their son’s—to do that.

Although she’s given birth to a child, whose life in many ways might require privacy, at the time of writing The Argonauts, Nelson may not yet have needed to confront the limits of autobiographical modes. “I guess the cheery way of looking at this snowball would be to say, subjectivity is keenly relational,” she says toward the end of a debate with herself before she is about to give birth, “and it is strange.” Later, she is more unforgiving to the vulture in her: “Who am I kidding? This book may already be doing wrong.”

It’s hard to know what the fallout in Nelson’s life will be. It’s harder yet not to cheer a little as the love story emerges in this newly twined form, shorn of the gender binaries that create repetition complexes that help no one. Late in the book, for example, Nelson effects one of the most astonishing juxtapositional portraits of evolution within the lives of two people. She notes, with minute detail, all the varieties of changes in her own body, the rising of milk, the intimacies and erotics that develop between her and her child. They are magical, familiar, and sometimes deeply sticky. Meanwhile, after Harry comes out of top surgery and comes down from painkillers and drains blood and fluid from bandages, he attends to her and she to him.

Both of them are argonauts, of a kind, voyaging out anew into a sea of love, having been battered and reassembled from previous shapes, psychological, physical, emotional. As argonauts, they are not, necessarily, Nelson points out, sailing toward a destination. They are, by nature, at sea, risking that they will float. Here, on the page at least, they do, beautifully, like a beacon. Love and thought do not annihilate one another, but make the other possible.•

Join us on May 19 at 5 p.m., when Nelson will appear in conversation with CBC host John Freeman and Miranda July to discuss The Argonauts. Be sure to visit the Alta Clubhouse to let us and your fellow California Book Club members know what you think of the book. Register for the conversation here.