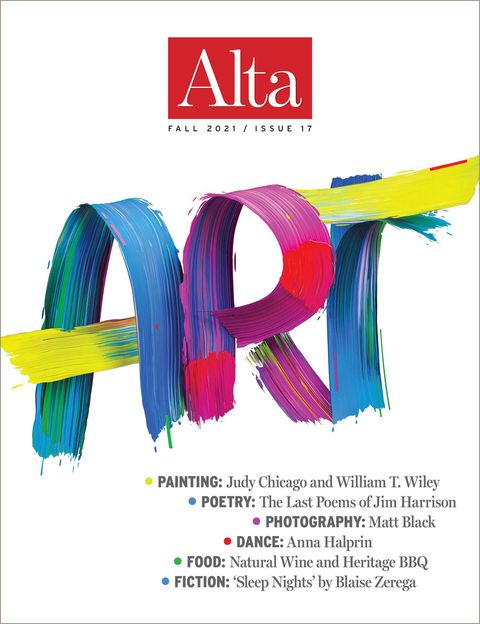 The creek freaks of Los Angeles seek out the city’s secret water—and fight to set it free. By Denise Hamilton • Photos by Christina Gandolfo

Written off by government geologists, blackballed by the oil and gas industry, and nearly broke, Charlie Steen had something to prove: that huge deposits of radioactive uranium could be found near Moab, Utah. The mines he drilled would change his life—and the surrounding area—forever. By Julian Smith • Illustrations by Mark Smith

The ‘Orderly Anarchy’ of Ancient California

The L.A. women behind the West Coast rise of natural wine. By Sydney Love • Photos by Christina Gandolfo

The pioneering artist Judy Chicago is celebrated in the city that launched her career. By Bridget Quinn

Judy Chicago in Her Own Words

In Search of an ‘American Geography’

The Central Valley’s Matt Black spent six years and traveled more than 100,000 miles—often by bus—photographing the ubiquity of poverty across the United States. By Jessica Zack

Alta Picks: Off the Wall

California’s world-class museums and galleries are an art lover’s dream. But don’t stop there. Surprising displays of creativity are everywhere. From desert plains to small-town alleys, here are six of our favorite places to experience art off the beaten path. By Jessica Blough, Nasim Ghasemiyeh, and Sarah Stodder

LACMA reimagines itself for the 21st century, challenging accepted notions of what artworks should be displayed and for whom. By Hunter Drohojowska-Philp

Funk Art and the Pursuit of Authenticity

William T. Wiley and his creative philosophy were unapologetically linked to the Bay Area. By Charles Desmarais

Not Everyone Should Be a Critic

Dave Hickey and the problem of great art going unappreciated. By Jim Lewis

How the pandemic revealed the value of lessons learned outside the classroom. By Catherine Womack • Illustrations by James Ransome

A Shiver of Sharks

Why have so many juvenile white sharks made the California coast their home? By Katharine Gammon • Photos by Tod Seelie

The Hard-Learned Lessons of History

Reconnecting to the Outdoors. By Jessica Klein

A Taste of Austin in Orange County

Heritage Barbecue perfected Central Texas–style brisket, sausage, and ribs. But because this is California, it also serves pastrami, pork adobo, and Jidori chicken. By Gustavo Arellano • Photos by Andrea D’Agosto

A Grande Dame of Dance

Anna Halprin left the New York scene in the 1940s to pioneer postmodern performance from a mountain deck in Northern California. Over the next 75 years, she created works with power to heal people and the environment, and to promote peace. By Carla Blank

Why I Write: To Change the World

Why You Should Read This: The Woman Warrior

Why I Write: Fire Season

Why You Should Read This: There There

Why I Write: To Be Tall

Why You Should Read This: The Barbarian Nurseries

The Pastures of the Empty Page

Larry McMurtry and the literature of place. By David L. Ulin • Illustration by Steve Carroll

• Publisher’s Note: The Poet As a Storyteller