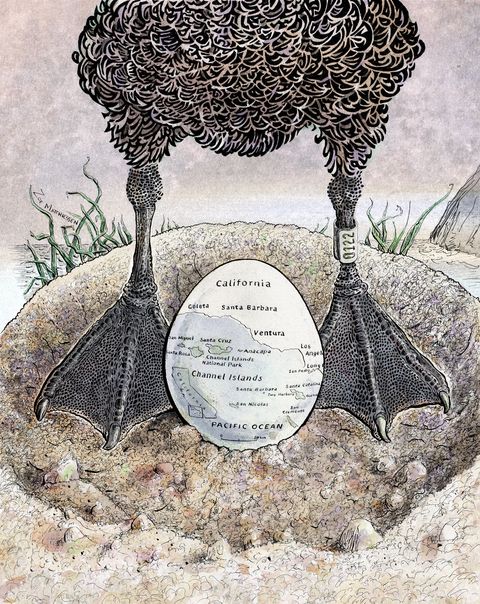 Over the past two decades, California’s Channel Islands—windswept, rocky, and eerily quiet—have emerged as a success story in the battle to restore and protect threatened ecosystems. Wildlife officials credit the recovery of these islands—five of the eight make up Channel Islands National Park—to the systematic removal of invasive species and human-made threats, which has helped preserve the habitats and populations of native species, 145 of which are found no place else.

Surprisingly, despite this progress, the U.S. Fish and Wildlife Service and other entities have approached the national park about the possibility of translocating a new breeding colony of black-footed albatross to its shores, even though the species has never nested there.

Purposefully introducing a foreign population after decades of exotic-inhabitant removal would be a drastic act. But with their habitat at risk—rising tides and temperatures brought on by climate change threaten the black-foot’s natural nesting grounds northwest of Hawaii—translocating the albatross to a suitable, though novel, environment 3,000 miles away, on these Southern California islands, might be their best bet to escape extinction.

Prior to the 1940s, the U.S. National Park Service had an active predator removal program. Since phasing it out, the NPS has largely refrained from intervening in the biodiversity of lands it oversees. However, according to Mark Schwartz, a professor emeritus at UC Davis who studies conservation science, climate change has made it “more obvious that a soft touch to management” is no longer acceptable. Some scientists predict that, even under moderate climate change, about half of the world’s species could die out within this century.

In response, conservation agencies are shifting to a more active—and controversial—role, expanding wildlife officials’ purview beyond just managing local ecosystems. Elizabeth Flint, a supervisory wildlife biologist for U.S. Fish and Wildlife in Hawaii, believes that, going forward, policies are going to be revised to “think about the system in a different way other than everybody managing their own little postage stamp of the earth.”

One proponent of enacting such policy changes globally is Island Conservation, an environmental nonprofit founded by two UC Santa Cruz professors. The organization’s mission is “to prevent extinctions by removing invasive species from islands” around the world. Translocation—also referred to as assisted migration—may sound contradictory to this goal, but Emily Heber, writing on behalf of Island Conservation, noted that current conservation techniques are not “sufficient to protect ecosystems and animals in the future” and that, when done right, translocation will have benefits that outweigh the potential harm.

Some radical hands-on approaches in this vein have already shown promise for sustaining biodiversity. In Glacier National Park, nonnative lake trout threatened the native bull trout. Through managed relocation, another term for translocation, park service employees relocated the bull trout into lakes and streams outside their natural habitat but not yet infested by lake trout, safeguarding the at-risk species from invasive competitors.

Another method that wildlife managers have deployed attempts to replace a species that has disappeared with another that serves a similar ecological function. Off the coast of the African island of Mauritius, a species of tortoise from the Aldabra Atoll, some 1,000 miles to the northwest, was inserted to replace the extinct native tortoise population. More drastic still are research attempts to edit species’ genetics to make them more resilient in the face of increased levels of heat and disease—threats that are becoming more common.

Critics are not yet convinced that these new forms of conservation should be widely embraced. Schwartz calls assisted migration a “terrible idea” and highlights the “many ways that things could go wrong.” He points to the unintended expansion of the cactoblastis, or cactus moth, which is native to parts of South America. The cactoblastis has been successfully used as a biocontrol agent against opuntia cacti in Australia and other places. However, after its purposeful introduction on the Caribbean island of Nevis to reduce invasive opuntia growth, the cactus moth spread on its own to Florida, where it is attacking native opuntia. Moving species opens up the possibility for adverse consequences, including accidentally creating habitat pathways for species to expand and become invasive pests.

Some 42 percent of the species listed as endangered or threatened under the federal Endangered Species Act are jeopardized—at least in part—because of invasive species. If left unchecked, they can take over ecosystems and dominate a region—more than 90 percent of the biomass in the San Francisco Bay is of alien origin. Schwartz maintains that other techniques that don’t involve a high risk of introducing invasive species, such as increasing habitat areas or protecting wilderness corridors for natural expansion, should be the first line of defense.

Despite these disagreements, there is a consensus that we must better protect imperiled species. And fast.

Rising almost 2,500 feet above the Pacific Ocean, the Channel Islands dominate the seascape of the Santa Barbara coast. Removed from the mainland by about 20 miles of cool Pacific water—Chumash people routinely paddled their canoes back and forth—life here feels secluded and disconnected, even with grand resorts and oil rigs dotting distant vistas. Unlike Catalina Island to the south, the northern Channel Islands do not attract tourists with charming seaside towns or boutique-lined avenues; they remain rugged and untamed, offering visitors miles of scenic hiking trails, kayak excursions through sea caves, and camping.

Often referred to as the Galápagos of North America, these isolated mountains of rock are inhabited by native animals that have evolved into unique—and in many cases miniaturized—subspecies of their cousins across the channel. The island fox is perhaps the best known of these locals, measuring only a foot tall and weighing about as much as a house cat. Once numbering more than 1,500 on Santa Cruz Island alone, these predators experienced a 95 percent population decline in just a few years owing to incursions of feral pigs and golden eagles.

Though the five northernmost Channel Islands were brought into the national park system in 1980, the earlier impacts of Spanish, and later Mexican and American, colonization and ranching are only just starting to reverse. Aggressive eradication measures against sheep, pigs, and other invasive species have helped reverse declines in the island fox and native island spotted skunk populations. Bald eagles have also returned to the skies.

Proposing a breeding colony of albatross runs counter to the efforts spent returning these islands to their natural order. U.S. Fish and Wildlife’s Flint is responsible for the Pacific refuges that contain 95 percent of all black-footed albatross globally. She explains that current federal policies are primarily aimed at returning systems to how they were before European intervention, about 500 years ago. However, she says, for “every conservation problem, no matter how local, we’re going to have to start thinking on a larger scale.” This means looking beyond regional victories and addressing problems on a macro level.

Classified by the International Union for Conservation of Nature as a near-threatened species—about 70,000 breeding pairs remain on the planet, mostly concentrated in a few vulnerable places—the black-footed albatross is migratory and spends the majority of its life in the open ocean of the North Pacific. These seabirds rarely come ashore, but when they do, it is typically for nesting and breeding, 95 percent of which occurs on the low-lying atolls of the Hawaiian archipelago. Flooding of these crucial islands presents the greatest risk to the species’ survival.

In October 2018, Hurricane Walaka demolished East Island in the French Frigate Shoals, northwest of Kauai. Before its destruction, its 11 acres of sand and gravel were home to black-foots, green sea turtles, and monk seals. During her career, Flint has seen at least three islands lost to erosion and rising tides, with more likely to follow. A 2015 study of Midway Atoll—home of the largest black-foot rookery—found that a two-meter rise in sea level would inundate up to 60 percent of its black-footed albatross nests. New breeding colonies are needed to replace the ones being wiped out.

Flint and her colleagues identified some of the islands within the so-called California Current, along North America’s West Coast, as locations that offered a high potential for albatross survival because of their elevation, protected status, and proximity to foraging sites. Though the ecosystem of the Channel Islands is unique and invasive species are implicated in 86 percent of all recorded extinctions on islands, Flint emphasizes that seabird colonies “typically don’t have much effect on the complex interrelationships between plants and insects and other terrestrial creatures, because they don’t forage on land.”

Despite the promising opportunity, no decisions or formal proposals regarding the translocation of a nesting colony of albatross to the California Channel Islands have been made. National Park Service officials remain cautious, stating that any assessment would require an “in-depth review from a science, feasibility, and policy standpoint.”

In Mexico, meanwhile, translocation of the black-footed albatross has already begun. Unwilling to wait until species are “gone to start responding,” Flint is assisting a team of biologists from the United States and Mexico who are reestablishing a breeding colony on Isla Guadalupe, off the Baja California coast, where feral cats had displaced the island’s seabirds. In January 2021, the binational team successfully relocated 21 eggs. (Giving hope for this project’s success, another species, the Laysan albatross, has thrived on Isla Guadalupe after the feral cats were removed.)

It is expected that the first generation of hatchlings, following standard albatross behavior, will travel back to the place where they were born to build their nests, securing Isla Guadalupe as a viable breeding ground. During the next couple of years, the team aims to move up to 42 eggs and 25 chicks annually, to form a new breeding colony of at least 100 birds.

As climate change inflicts ever more damage on native habitats, and as more species are added to endangered lists, opposition to new conservation tactics like translocation may soften—including within the scientific community.

Schwartz of UC Davis may view assisted migration as a terrible idea, but even he concedes that right now, it may be “the best terrible idea that we have available to us to prevent extinctions.”•

Related Stories
Flight of the Condors
California’s Lone Wolf Pack
Feral Horses, Fierce Controversy
Scott Addeo Young Scott Addeo Young is a San Francisco–based writer whose work has appeared in numerous publications.
This content is created and maintained by a third party, and imported onto this page to help users provide their email addresses. You may be able to find more information about this and similar content at piano.io
Advertisement - Continue Reading Below
More From Premium
Trailblazer: Syren Nagakyrie
A New Concert Hall for the Colburn School
Advertisement - Continue Reading Below
Alta Picks: Side Hustles
Ada Limón Explores the Language of Love
How Poems Inform Teresa Flores’s Work
She Explored the Undercurrents of Life
Personal History: Janelle Brown
Planting a Tree Is Not a Way of Life
Personal History: Bret Easton Ellis
The Pervasive Loneliness of ‘Play It As It Lays’