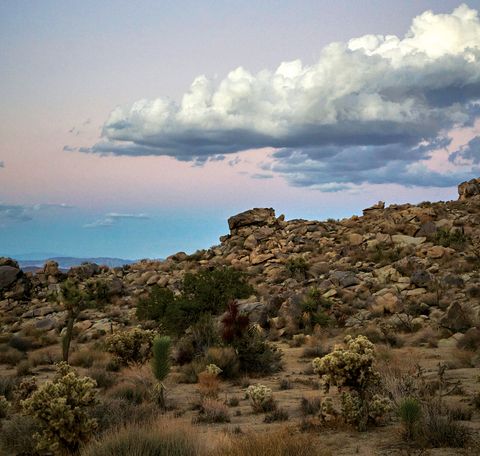 T.E. Lawrence was taken by his guides to a ruin in the desert of North Syria. The Arabs believed that it had been built by a prince for his queen and that its clay had been kneaded with the essential oils of flowers. As Lawrence wrote in Seven Pillars of Wisdom, they showed him through the rooms:

“This is jessamine, this violet, this rose.… Come and smell the very sweetest scent of all.”… We went into the main lodging, to the gaping window sockets of its eastern face, and there drank with open mouths of the effortless, empty, eddyless wind of the desert.… “This,” they told me, “is the best: it has no taste.”

We associate the desert with a kind of purity or cleanliness; it’s a spare place where all the complicated details of civilization in the temperate zones have been stripped away. In this crucible, some of the world’s religions have been born—one thinks of the temptations of Christ and the origins of Islam.

Writers and artists have also been drawn to these simplified but harsh landscapes. The desert winds sometimes intrude on nearby, more cultured enclaves—like the Santa Ana winds, which bring heat, short tempers, and mischief into the Los Angeles Basin.

As Raymond Chandler evoked it, “There was a desert wind blowing that night. It was one of those hot dry Santa Anas that come down through the mountain passes and curl your hair and make your nerves jump and your skin itch. On nights like that every booze party ends in a fight. Meek little wives feel the edge of the carving knife and study their husbands’ necks. Anything can happen. You can even get a full glass of beer at a cocktail lounge.”

The romantic, poetic, and spiritual desert is more than metaphor. As our climate changes, many have begun to see “the desert” as a factual description of the future planet. Sci-fi visions like Mad Max and Dune are beginning to seem less like fantasies and more like weather forecasts.

Other parts of the planet might be experiencing hurricanes, floods, and record-breaking rains. But out here, beyond the 100th meridian, in the already parched West…we are more likely to die of thirst than drowning.

This issue of Alta Journal tries to gather these threads together. We’ve collected some of the best writing inspired by the contemporary desert experience—reporting on and explorations of our warming and drying western territory.

We track the endless search for the Lost Dutchman Mine, a holy grail quest that has claimed the lives of many seekers. We celebrate the enthusiasm and expertise of Ken Layne, the creator of Desert Oracle, a field guide—of a sort—to the American deserts. You would be safe to travel with him in any corner of the arid West.

We spotlight Chris Colin’s adventures in Death Valley, where the temperature rises many degrees off the charts. And we also discover the best biker bars where you might rest your Harley in the shade, and where convictions for drug trafficking, money laundering, and even murder—think outlaw biker gangs—are not considered part of the norm. In fact, everyone is welcome at these six outposts.

Our desert issue also features a smattering of short pieces, like a visit to Blue Sky Center in New Cuyama and new fiction by Susan Straight. There’s a fun survey of iconic pop culture moments, from famous magazine shoots (Angelina Jolie, Marilyn Monroe) and music videos (U2, Janet Jackson) to TV shows (Breaking Bad, Kung Fu) and movies (The Hills Have Eyes, Thelma & Louise). And we tour the sandy proving grounds of the aeronautics, automobile, and space industries, as well as the training area used by General George S. Patton’s tanks.

We hope to honor some of the great desert rats, like Edward Abbey and Charles Bowden—who wrote with affection and insight about these climates. They saw the western desert as their native territory, where America’s values were tested and sometimes found failing. Their gifts as writers made us feel the spirit of the desert, made us want to go there. In this issue, we present another generation of writers who have also found inspiration—spiritual and literary—in the deserts.

Lawrence was right. The scent of the raw desert is spare. And its purity is a revelation.•

Related Stories
Living Treasures of the American West
The Promise of a New Space Age
Audience Is the Future
Will Hearst Will Hearst is the editor and publisher of Alta Journal, which he founded in 2017.
Advertisement - Continue Reading Below
More From Dispatches
The Desert Is Coming
Issue Party: Alta Journal 22
Advertisement - Continue Reading Below
Will Alexander’s Sonic Grammar
Lego Bike Safety Lessons
Special Report: California Community Colleges
All About Calendarios de Varilla
You Are Here: 2022 Highlights
The Year in Tech
Alta Journal Editors’ Top Stories of 2022
Trailblazer: Alec Foster