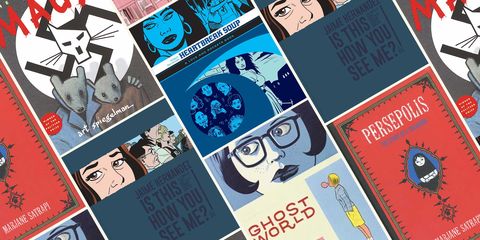 Recently, the National Book Foundation presented Art Spiegelman, author of the graphic novel Maus, serialized from 1980 to 1991, with its 2022 Medal for Distinguished Contribution to American Letters, one of its lifetime achievement awards. In his acceptance speech, he commented, “I now know that everyone euphemistically calls them graphic novels.… For me, comix with an ‘x’…is a more accurate description of the form I love.”

Spiegelman talked about how Maus had been rejected by every publisher in town before it became a blockbuster and said that the award made the book a blockbuster again: “As in, What? They’re letting cartoonists into the great hall of literature? Well there goes the neighborhood.” He went on to express his pride in his medium’s “vulgar” roots and the power of comics to provoke controversy and get people to question authority. You can see a similar willingness to stir the pot in Jaime Hernandez’s Maggie the Mechanic, the January California Book Club pick, which may chronicle wild adventures, shot through with science fiction images and glamour, but eventually proves more memorable for its realism. As Maggie and Hopey, the beloved protagonists of Maggie the Mechanic, grow older in later comics, Hernandez draws their aging women’s bodies honestly.

Hernandez’s 2019 Is This How You See Me? rejects any sort of age limit, any sense that the antiauthoritarian rebellion of comics is the exclusive province of the young. In this one, Maggie and Hopey are fiftysomethings who go to a punk reunion together. Hernandez retains an easy familiarity between them, reminiscent of an old couple, maybe even soulmates—Maggie tries to get Hopey to make a pass at her although she’s in a long-term relationship with a man. The boldness with which Hernandez allows her the grace of aging naturally on the page feels like a pushback against the erotic gaze with which her younger body was rendered in his early comics.

After you finish the comics gathered in Maggie the Mechanic, consider a few other classic comix—ahem, graphic novels—or the movies inspired by them. The obvious follow-up is, of course, Gilbert Hernandez’s Heartbreak Soup, also a Love and Rockets compilation. The book collects early magical realist stories set in a mythic Latin American town, Palomar, about which Gilbert Hernandez has said, "I really just wanted any Latino from anywhere to feel like they belonged there.” The stories feature a powerful, complex woman, Luba. However, the artwork is stylistically different from that of Maggie the Mechanic. Fewer curves, more experiments, more interest in the hyperbolic—what’s grotesque and fantastic—than with the patently ordinary.

A blackly comic depiction of longtime female friendship can be found in Oakland-based cartoonist Daniel Clowes’s ironic, eccentric 1997 graphic novel, Ghost World, adapted into a film directed by Terry Zwigoff that stars Thora Birch, Scarlett Johansson, and Steve Buscemi. The story explores the dissolution of a friendship between two scornful young women after their graduation. One of them, Enid, plays a prank on Seymour, an older, dorky vintage-record salesman, but she develops a deeper connection with him, seeing in him herself, as her friend Rebecca matures. The opening of the film is set to a cheery, fast-paced Bollywood tune, “Jaan Pehchan Ho,” but most of the piano-heavy soundtrack is questioning, more slowly paced, mirroring Enid’s melancholia as she comes up against the world’s fakery and hypocrisy.

Antiauthoritarianism is the theme of another of the all-time great graphic novels, Marjane Satrapi’s 2000 Persepolis. It chronicles the author’s coming-of-age during and after the fall of the shah and the Iranian Revolution of the late 1970s. As in Maggie the Mechanic, the graphic novel’s protagonist responds to an oppressive environment by joining a punk scene where her anger can be freely expressed, though the protagonist finds that her anger has different targets than that of her peers. Persepolis was adapted into a powerful black-and-white movie that manages to capture, in its juxtapositions and jagged line work, the startlingly fast transformation wrought by the Iranian Revolution, which is nonetheless complicated by ordinary humor—the film features, among other things, an amusing and moving rendition of Survivor’s “Eye of the Tiger.”

The friendship-romance of Maggie and Hopey was a revolutionary depiction when Love and Rockets first came out. Decades later, in 2010, a love story between women, closeted Clementine (Adèle in the movie) and proudly out, blue-haired Emma, unfolded in the lyric, grayscale French graphic novel Blue Is the Warmest Color, by trans writer and artist Jul Maroh, who started the book when they were 19. The 2013 award-winning film adaptation of this book, too, has a lovely moodiness, though it has also been marked by controversy for its sex scenes, which displeased the author.

At the close of Is This How You See Me?, Maggie is traveling the aisles of a grocery store with the man with whom she’s in a relationship when she hears some punk music featured earlier in the book—a song by fictional band Ape Sex that mashes up a string of popular, saccharine music lyrics. In a final radical repudiation of expectations, Maggie’s mundane chore pivots, momentarily, to a quick aside that critiques corporate rock. Contrary to the popular view of aging, some of us are still—or maybe even more—critical of power in middle age after undergoing the humiliation of finding ourselves unable to access our youth any longer, surrounded even in the places closest to our hearts by a bunch of kids who not only don’t remember what we remember but don’t want to, busy as they are making their own dramas, getting their own hearts bruised.

While the book’s ostensible theme is a sad one—you can’t go home again—small, tender reversals in scene after scene also remind us that the consolations of very old friendships, those relationships that turned you into yourself, do not always line up quite so neatly with the conventional wisdom about the way homes disappear underneath you.•

Join us on Zoom on Thursday, January 19, at 5 p.m. Pacific time, when Jaime Hernandez will join CBC host John Freeman and special guest Jaime Cortez to discuss Maggie the Mechanic. Buy your copy of Hernandez’s book through the Fantagraphics website and use the code CALBOOKCLUB15 to receive a special 15 percent discount for CBC members. Please drop by the Alta Clubhouse to let us and your fellow book club members know your thoughts about the book. Register here for the event.

SHOCK OF THE NEW

Gary Groth, the cofounder of Fantagraphics and editor of the Comics Journal, writes about discovering Love and Rockets while going through the journal’s mail. —Alta

Writer Kevin Sharp writes about finding Maggie of Love and Rockets at the comics store where he worked. —Alta

Take a look at a beautiful original cartoon by Jaime Hernandez, created for Alta Journal, about why he draws. —Alta

Here are bestselling titles at independent bookstores across California for the week ending January 1, 2023. —Alta