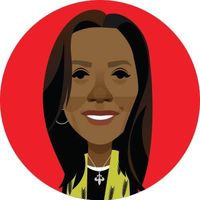 Lynell George is an award-winning Los Angeles–based journalist and essayist. She has been a staff writer for both L.A. Weekly and the Los Angeles Times. Her work has appeared in various news outlets including Smithsonian, Vibe, Boom: A Journal of California Preservation Magazine, Zocalo Public Square, the Washington Post, Essence, and Ms., as well as providing arts commentary for KPCC's The Frame and KCET's Artbound. She was selected to be a USC Annenberg/Getty Arts Journalism Fellow in 2013 and received the Huntington Library’s Alan Jutzi Fellowship for her studies of California writer Octavia E. Butler in 2017. She is the author of No Crystal Stair: African Americans in the City of Angels (Verso/Doubleday) and After/Image: Los Angeles Outside the Frame, a collection of her essays and photographs published by Angel City Press. She is the recipient of a 2017 GRAMMY for her liner notes for “Otis Redding Live at the Whisky A Go Go.”

In Laura Warrell’s first novel, Sweet, Soft, Plenty Rhythm, jazz becomes a character all its own.

The clean, crisp pages of a handmade journal help writer Lynell George puzzle out her thoughts.

Playing a Sweet Mix of Gumbo

Chuck Taggart uses the music of his native New Orleans as a way to bring us all together.

In A Handful of Earth, A Handful of Sky, Lynell George explores the inner life of the MacArthur-winning Pasadena writer Octavia E. Butler, who died in 2006.

In a new memoir, Diane Keaton disassembles her family’s narrative.

The jazz saxophonist gave a legendary after-hours performance at Jack’s Basket Room in 1947. No photos or recordings captured it, and last year a suspicious fire destroyed the L.A. building.